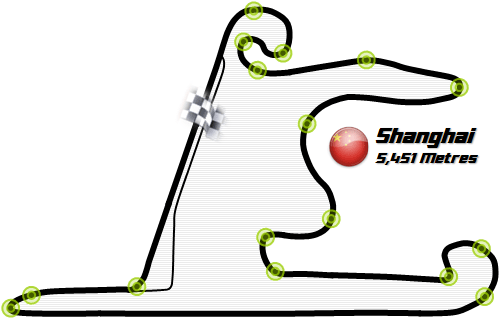 The Chinese Grand Prix circuit is located in the Jiading district of Shanghai, just 20 kilometres from the city centre. Shanghai is the tenth largest city in the world and has been a key part of the recent growth in Asia. 200 years ago the region was regarded as small with little significance, but this changed as trade started to build with western countries. Shanghai played a crucial role in the 19th Century Opium War and used to have a bad reputation due to the many brothels and casinos there. The city is much cleaner now and economic reform in 1992 allowed it to grow quickly. Shanghai now rivals Hong Kong as China's most important business district and it has the busiest shipping port in the world.

China originally expressed interest in staging a Formula One Grand Prix at the start of the nineties. The Zhuhai International Circuit was built and a deal was reached to hold a Grand Prix there in 1999 but the race was cancelled due to infrastructure problems surrounding the facility. The Chinese Government made another more serious attempt at Formula One in the new century and constructed the space age Shanghai International Circuit. Shanghai was chosen as the location to stage the Grand Prix as Beijing had been confirmed as the host of the 2008 Olympic Games. The circuit took only eighteen months to build and was ready in time for the 2004 Formula One World Championship. The circuit came at a cost of half a billion dollars and is regarded as the most advanced of any racetrack anywhere in the world.

Shanghai is the typical Herman Tilke designed circuit. Much like Bahrain and Sepang it stretches out over a vast baron expanse and is made up of many varied technical corners that really test an engineer. The first turn spirals into itself, and from there drivers snake around a mix of fast and slow sections before reaching the1200 metre back straight. Like Sepang, the circuit has been built on a swamp and there are fears that some of the track will sink and will cause bumps on the surface. Strangely, drainage grates around the track edges have caused problems for race organisers because they were not originally secured very well. It would only take a car to run over them for a large piece of metal to stick upright from the ground, and in 2005 Juan Pablo Montoya retired when he hit one. The same thing happened during a touring car race and the driver was lucky to survive because the drain cut a hole right through the chassis and past his seat. The track does not rise or fall much, and is shaped like the Chinese character Shang which means 'ascend'. A mammoth grandstand flanks the main straight and offers the best view because there are no places where the fans can get close to the action. The pits and paddock area of the track is the largest and most impressive in the world, and the teams reside in bungalows rather than motorhomes.

Red is a lucky colour in Chinese culture so maybe that is why Ferrari has won half of the six races there. Strategy plays a key role in Shanghai because the lap is very long and there is a big punishment for stopping too early or too late. The track has such a wide mix of corners that a car will always struggle on at least one part of the circuit as engineers try to come up with the best compromise. The very long back straight allows for overtaking, but if you can't get close enough to the car in front to pick up a slipstream they may just power away from you. The braking zone into the hairpin is huge so there is always some action into that corner, and in the dry it is the only real overtaking place on the circuit. There are plenty of places to pass in the wet because the many different corners require different driving styles, and some have different lines. Modern aerodynamics make it too difficult for the cars to race closely otherwise.

Turn one is a great challenge for the drivers as it spirals through a full 270 degrees. The drivers lose 200kph of speed throughout the bend and have to slow the car down gradually, rather than slam on the brakes like they do for most corners. The long turn that leads onto the back straight is tricky as well because it also rotates through 270 degrees. Drivers enter the corner from a tight left hander and are under acceleration as they change direction. This will become increasingly difficult because the driver must get a good quick run onto the back straight. A few tenths lost at the start of the straight will turn into a few seconds at the end. Both corners allow the driver to take several different lines and this is especially evident in the wet.

Sebastian Vettel headed a Red Bull 1-2 finished in atrocious conditions. The rain and subsequent spray caused problems for most of the field. Jenson Button came home third after a hard fought scrap with Mark Webber.

The racing at China is usually fairly good and three of the five races there have been very exciting. The weather may play a part and if it does the Grand Prix will become fascinating because almost every corner will have a few possible racing lines.

Related Articles
F1 PriceF1 PaddockF1 TrafficF1 GrandstandF1 FoodF1 HotelsF1 SeatsF1 TimetableF1 TeamsF1 Drivers
F1 Articles
F1 Booking Questions
The race has been postponed due to the coronavirus how can I apply for a refund?
Hi, please send email to service@021f1.com, included your order number inside the email.
Hi - where do I pick up the tickets when I buy them. I am in Hangzhou - can you send them to me?
Hi, please send your address and the order number to us.
Hi,I live in Australia, do you send the tickets in the post, by email or pick them up at the circuit?
Hi, we will send the tickets by express company.
If there is the remark „reuseable if available „ can I go Froday to Sunday each day or can it happen thst I don’t get it if I had been there already a day before?
Hi, one ticket is for three days.
When can we receive the tickets after we paid for them?
Hi, the tickets will be issued in March.
Hi, is the Friday pit lane walk only at 5 or it can be done anytime on that day?
Hi, after 5 o'clock only, about 2 hours.